Another Reason Why I run 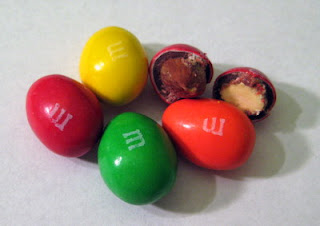 I bought a packet of almond M&Ms a week ago. They were on sale and, never able to resist a bargain, I had to throw them in my grocery trolley. Then I paid for them, took them home and stashed them up in the pantry for a weak moment.

The weak moment came on Wednesday. I still was suffering from the last lingering effects of my cold - alternating blocked and runny nose and unfriendly sinuses. I was tired from the run that I'd done the day before which I probably shouldn't have done because the cold was lingering. And I was bored - and that was probably the real reason that I had the weak moment. I'd been cutting out costumes for body-builders and was onto about my fiftieth pair of posing trunks. And my brain was slowly rotting on the inside from a constant diet of Grey's Anatomy and Private Practice because I'd forgotten to set up the work room recorder for the Olympics. I needed a little pick-me-up!

Well that's how I justified opening the packet. I'd have just a couple to get me through a slump. I went upstairs to the kitchen and found those luscious little balls of deliciousness. The bag entered a very futile resistance to my trembling fingers - oh, yes I like them just that much. And I tipped five into my hand. Toby's pleading eyes were the only ones to witness my little food indiscretion and I saw no condemnation there. Only envy.

I took my five little M&Ms downstairs and savoured them before cutting out yet another pair of posing trunks. The five little morsels hadn't really filled the hole that boredom had created and their sweet sugary goodness had only enticed me to partake again. So upstairs I trotted - taking the steps two at a time because it's kind of like working them off before you eat them. Or it might be if I had a set of stairs that went the height of a 50 storey building.

This time I tipped about ten into my hand. And walked back downstairs to enjoy them.

I was back upstairs before fifteen minutes were out with Toby now starting to look quizzical (like he had when Sam had farted on the bed). And then I was back about fifteen minutes after that. And each trip I seemed to get a slightly bigger hand full. On the last trip there weren't that many left so I just took the rest of the bag. I tipped them onto the work table and they were gone too soon. Then I hid the empty bag at the bottom of my bin, covered with little shreds of shiny emerald, royal and flaming red. And I was still bored but this time it was tinged with a little food regret. So I vowed that I wouldn't weaken again even if they were a ridiculous, incredible bargain.

Yesterday I went back down to work and I found one lone almond M&M on my work table that had tried to escape destruction. So I ate it - and I wanted more.

And this is another reason why I run.