What's wrong with us runners??!!

It's been hideously hot this last week. Not as hot as it has been in outback Queensland where the temperatures have been hitting close to 50C in some places. But hotter than it usually is. And hotter for longer than it usually is. And hotter at night than it should ever be. The temps didn't dip below 25C/77F for three nights in a row. And the humidity? Up around the 80% every morning.

Most of the population has decided that the only way to deal with this heat is to lock themselves away in their air conditioned houses or go to air conditioned shopping centres or maybe take a dip in the pool. All very sensible alternatives.

But what do we runners do? We get up super-early to beat the heat (who are we kidding - there's no beating this heat) and we run regardless.

Saturday morning a group from our squad were up well before the kookaburras hitting the road for their long run training for the Paris marathon in April. I was one of the slackers who only got up at quarter to five to do the 12k run. 12k was hard enough when the only breeze there was was what you could produce yourself and the water bubblers were giving you tepid water. I have no idea how the other group did it. But I know that the staff at the coffee shop we went to afterwards were all regaled with our stories of epic heroism and strength and fortitude in the face of bitter odds and hardship. 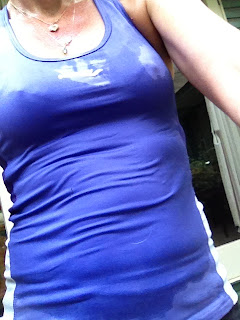 on Facebook and I had comments that reminded me that I'm not the only crazy out there. We love to revel in the fact that we've sweat so hard that we look like we've been swimming, that we can't tell whether it's our nose running or we're just melting and that we've lost half a kilo in just 5 kilometres. We love to show people all our war wounds. The toe nails lost, the bloodied knees, the chipped tooth from the face plant onto the concrete, the blood blisters from the beach run. And we love to share how far we've run before most people were even out of bed.

We are basically masochists at heart. We don't do Fifty Shades of Grey - we prefer 50 Shades of Black and Blue. We get off on knowing that we've taken that teaspoon of concrete. No one tells us to harden up!

So in the spirit of being a REAL RUNNER. I'd like to gratuitously brag that my run today started at 5:00am AND it was stinking hot AND I ran 12k AND I finished up with a 3k walk with my two favourite pooches. I was home before half of the family was out of bed! And believe me you're not the first to hear this. My coffee lady already knows, as do both of my sleepy sons and the lady at the supermarket. And they're all impressed (well, in my head they're impressed. I'm sure the eye rolling was because of a little dust in the air.)

Toby, however, is not that easily impressed with my feats on my feet. I think he's annoyed that he hasn't been invited on my runs since it's gotten so hot. I'm only thinking of him and trying to imagine how I'd feel if I was running 12k with a fur coat on. I got home to find him devouring an issue of Runner's World - quite literally. Although he may have been annoyed with the article on runner's nutrition that it was aimed at omnivores rather than carnivores.

I should just be grateful that these are the only running shoes that he's chewing on. 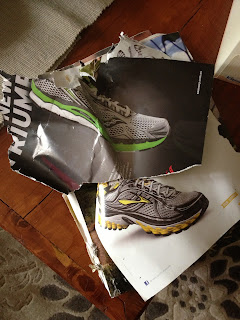 But this behaviour isn't as disturbing as how I found Teddy this morning. I don't know where Toby found out about pole dancing BUT I'm going to be having a serious chat with each of my sons. 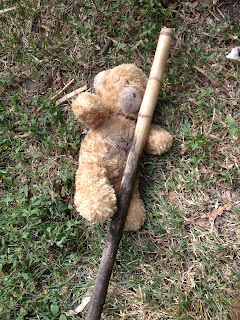 Who else has done something epic and hard-core today? Please feel free to do a little gratuitous boasting of your own.
Posted by Char at 5:38 PM