Ever had a wardrobe malfunction? I have.

My worst was probably when those see through plastic bra straps were in. People of my generation (ie getting on in years) were brought up to NOT show their underwear. We made sure our skirts and shorts covered our undies (and seriously we pushed that to the limit in the 70s) and our bra straps were tucked in. The showing of underwear was considered, at the worst, lewd and at the best, racy. So see through bra straps seemed a good idea.

And they were ... until they'd past their use-by date. Problem was that you weren't given a use-by date on the packet so it'd kind of sneak up on you. Surprise! I was lucky enough to have both straps do a synchronised snapping while I was out at the shops. I was walking along one moment trussed up like a Christmas chicken and the next minute the chickens were running around the coop.

I was momentarily flummoxed (love that word but not the feeling) - until I realised that it was the best possible place for the straps to go. I could just go down to the bra shop and buy another pair. Problem solved.

Today I had another wardrobe malfunction. And I'm going to blame this on Iven and Sam.

We went shopping yesterday. Sam needed some good pants for his prac placements in the upcoming weeks. Iven had a gift card to use and I just wanted a coffee. We went out to a shopping centre a bit further a field than our local because our local is undergoing renovations and basically it's not fun to shop there.

We ended up in Big W, a department store that's for the budget-conscious shopper because all three of us are cheap! I'd shopped there a bit before Christmas and found a great new range of sports wear by Michelle Bridges, the trainer of Australia's biggest loser. I'd bought myself a pair of running shorts and then the boys had bought me another pair for Christmas and they ticked all the boxes - cool, comfortable, big enough zip pocket for my car key and didn't make me look fat. So while Sam was browsing, I went to the women's section and found myself a whole new outfit. I tried it on quickly because I didn't want to keep the boys waiting and it looked and felt okay so I bought it. Note to self - when trying on running clothes in the change room, make sure you actually move around in them.

It was hard not to run yesterday just because I had new clothes to run in but I was good and kept the day as a rest day. (See, I do follow my training schedule Coach Chris) But the clothes were all laid out for me ready to go for this morning's run. I put them on and they looked as good as they had the day before in the change room and then I headed out the door. 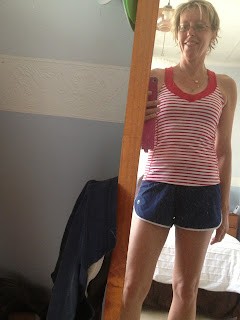 When I'd looked at the receipt the day before I'd had a little laugh because the shorts were called cheeky shorts. They hadn't looked cheeky on me. I'm almost 50 and I've never done cheeky and I'm not about to start now unless the dementia really takes a hold.

Well, today I DID cheeky.

It was cheeky in the way Angelina did cheeky at the Oscars. 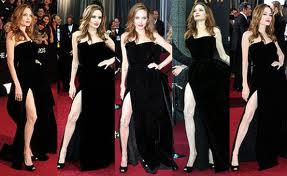 I hadn't realised that the side split was split ALL THE WAY TO THE WAIST. So every time I lifted my leg there was a good expanse of pale, pasty, pallid and possibly cellulitey thigh on display. And the hem had a tendency to flip up making the run a lot more risqué than I was comfortable with. 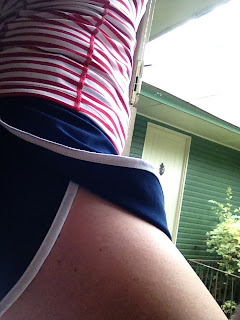 And then there was the top. As I ran, my top experienced the forces of gravity more than any other part of my ensemble. I don't like showing my once-white-but-now-an-ugly-grey bra. It's a dead give-away that I don't separate my whites and coloureds when I wash. And definitely goes against my strict Baptist-don't wear bikinis-don't have your ears pierced-and definitely don't show any flesh upbringing. 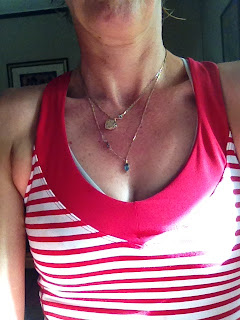 I decided early on that I shouldn't worry too much about it - it was just after 5am when I left home so I figured that there probably weren't many people who were going to see me.

Wrong! I saw five people that I knew while I was out. (One was Iven and he was pleasantly surprised to see me showing cleavage for a change). I had to stop and chat to two of them who I hadn't seen in a while.

Why is it that I can do really long runs and not see anyone and when I don't want to see anyone I see them in droves?

Has anyone else had a wardrobe malfunction on the run? (or not on the run?)