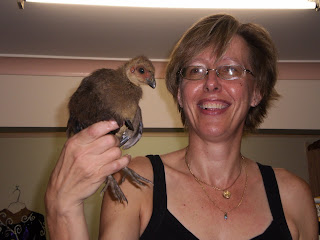 It was my day for turkeys yesterday. I blogged about the first incidence then. The second turkey-related event happened in the afternoon. I was sitting at my sewing machine in the workroom when I heard a clatter. Sam was home at the time so I disregarded the noise as him. About five minutes later it happened again but this time it sounded like something had hit the mirror in our change room. I got up to investigate and there it was - a juvenile scrub turkey. 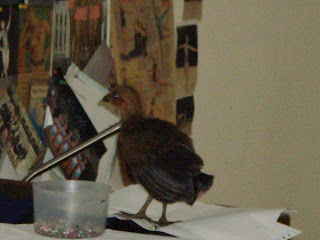 I don't know who got the biggest fright, the turkey or me. We faced off for a moment then I took a small step forward and that was it, he was off. He fluttered all over the room. Perched on table tops, rolls of fabric, racks of leotards - with me pleading for him not to poop on anything important. Eventually he flew into a corner behind a big box of scraps and trapped himself so I grabbed him by his legs and relocated him into the school next door. On the way out I gave him a stern warning about the perils of entering our back yard - it is dog territory after all - and about entering the workroom of a slightly manic ex-vet who knows how to break a bird's neck with a twist and a tug. Hopefully we've seen the last of him.
Posted by Char at 4:26 PM