Saved By a Candle

It was my running friend, Jenny's birthday this week so after speed session today we planned to have breakfast in her honour. Speed session is held at the University of Queensland on the path that follows the Brisbane River and we breakfast at Wordsmith's Cafe which is on campus. Wordsmith's is basically an outdoor cafe - surrounded by trees and lots of local wildlife.

As is my tradition I made Jenny a birthday cake. I got up really early yesterday and had it in the oven by 6:30 am so it could be cool enough to decorate before I started work. I was really pleased with the end result - 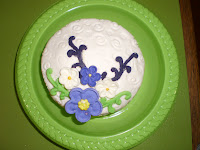 When I picked it up this morning I realised that something was missing - the birthday candle - so I stuck one in and covered it with plastic wrap. I carefully loaded into the car this morning at 5 am and drove (again very carefully) to the uni.

I gave Jenny her cake which she left on the table while we went and ordered. We arrived back to find a scrub turkey on top of the table pecking away at all my hard work! I was upset because I'd spent a bit of time and effort on my masterpiece but on closer inspection we found it totally unscathed. The stupid bird had only managed to peck at the candle that had only been added as an after-thought.

And on the topic of creative pursuits, I finished my first Rhythmic Gymnastics costume of the year. It was a marathon effort but I'm satisfied with the end result and thought I'd share it. 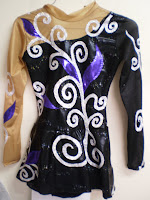