Bubbles and I racked up two walks this weekend. Woohoo! I took her along to meet the squad on Saturday morning. She was a bit confused that I was in my running gear and it was still pretty dark outside and yet she was being invited along. I was stupidly surprised when a few of the squad members knew her name - they'd never met her before. But they'd read my blog and seen her pic. And I shouldn't have been so surprised.

We had a great walk along the river and Bubbles managed to PR a 1k split - 10:23!! A minute faster than her Thursday walk. I think she's getting fitter.

Then we went for a walk up through the bushland at the back of my suburb. It's a really lovely area but very hilly. Probably the wrong walk to do when I'm supposed to be taking it easy but once you've started, the only way to get back home is to keep walking. I kept checking my HR monitor - it got up to 176 on the last awful hill - and wondering if the numbers I was seeing were really abnormal. So frustrating - you can't even go for a little walk without overthinking and worrying.

The rest of the day was filled with baking. I'm still working through the recipes in my new book and the Bento Cupcakes looked really appealing 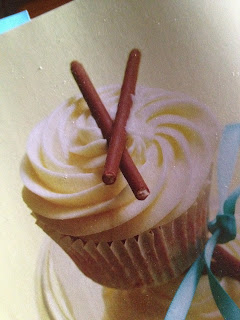 Picture from my new cupcake cookbook - Making Cupcakes With Lola

They're a chocolate batter with chopped chocolate and in the centre of the cupcake is a caramel-filled chocolate - Yum! I never worry about trying out new stuff because it always works out so I went ahead and followed the recipe to the letter and this is what came out of the oven ... 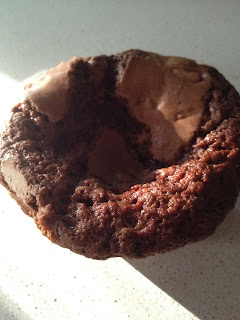 ... Note the big crater in the centre of the cupcake. The cupcake in the original picture DID NOT have one of these. Major fail!! But I went ahead and made the icing - white chocolate cream cheese frosting - and thought I'd hide the concavity with a mountain of sweetness that could put most people into a diabetic coma.

I'd never made this type of frosting before. It involved making a white chocolate ganache and mixing it into the cream cheese frosting and then refrigerating it for about an hour till it was firm enough to pipe on. At this point I'll mention that it's a British cookbook and we're in Australia in the hottest time of the year. I'll also mention that I chose to ignore the heat factor despite the fact that I'm usually a fairly intelligent person. And this is the result ... 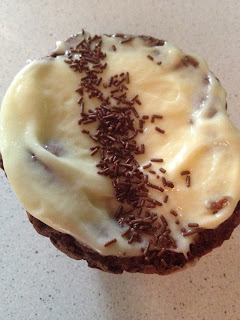 My frosting just couldn't manage to hold a swirl so after a couple of failed attempts I just slopped it on. It doesn't look quite like the cookbook picture.

Talk about a blow to my fragile ego - not only have I lost my running mojo but now I've lost my cupcake baking mojo. What next?!!!

But another attempt at a different recipe put my mind at ease. 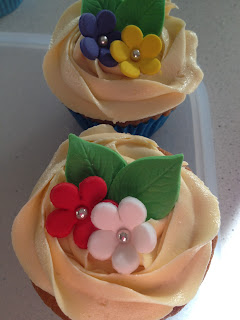 The caramel biscotti ones worked out just fine. Phew!

Good luck to #1 son, Sam today starting a week of exams. If he got marks for style he'd ace all his exams - here's a photo of him in his new pyjamas. 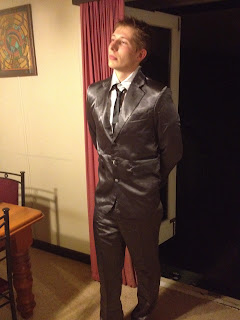 Hope you all have a good running week. Could you all please run an extra k or two for me?