I have an appointment at my acupuncturist today. This will be number four and the second time that I've had this particular one. The first two sessions were with a locum, the triathlete. This particular one is a Chinese lady who also does herbal medicine. I had my first appointment with her last week and I must say we had a very odd conversation at the beginning.

She had the history that the locum had written down but there were some questions that she wanted to ask for herself. Like whether my extremities are colder than my core (yes) and how long I'd been unwell for (on and off for two and a half years). She also wanted to know more about the nausea. I told her about the lactose intolerance and the, ahem, wind issues. But it was her next question that left me a little stumped.

She wanted to know how my farts smelt! Did it smell bad or was it odourless? How does one put into words the quality of  one's flatus? Yes, sometimes I can clear a room and other times it could pass unnoticed if not for the trumpet herald. And if I said I liked the smell would she think I was vain? So many things flashed through my mind but I found it hard to verbalise an answer.

But having had time to ponder the issue I've decided that the question was a self-protective mechanism. Her intentions were to stick needles into my abdomen and I guess she was just wondering if she was going to have to don her World War 1 gas mask and crank up the incense. Or maybe she thought that if she used a wide-bore needle and attached tubing and a bottle she could have a barbecue that night. Or maybe she wanted to know whether it smelt like methane and if so she'd snuff out the incense all together.

I've taken a lot more notice of my 'odour' this week just so I can report back with some accuracy. And I'd like everyone to know that it smells like jasmine and gardenias. I'd also like to say that I AM vain and I lie occasionally.

I really think that the acupuncture is helping, though. I have had way less days where I'm nauseated. My energy levels seem to be a little better. But best of all my running has been very encouraging. Today I did the route out to the uni, around the duck pond and back home. It's an undulating route with a bit of a hill on the return. I've walked that hill every time I've done this run. But not today. I ran all bar 200 m of the 10k. It was slow - 1:06 - but the last time I did that route it took me 1:17. That was only two weeks ago. And to prove that I've improved, there was only 1 beat difference in my average heart rate.

It's an incredibly slow process but I'm seeing results.

And the final good news for the day is all about my little baby. Toby has mastered the down-stairs!! I left him upstairs yesterday when I went down to my workroom and he came and found me. That's two flights of stairs and an awful lot of courage.

We've discovered that he has special healing powers. Josh brought over a friend the other day who was feeling a bit down and after a puppy hug he was feeling a lot better.

And Josh has also discovered that he's a great way to get attention from girls. Just put up one of these pics on your profile and see what reaction you get. 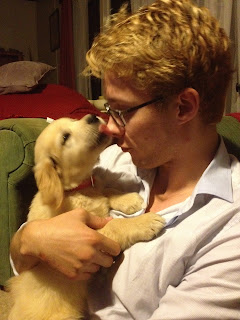 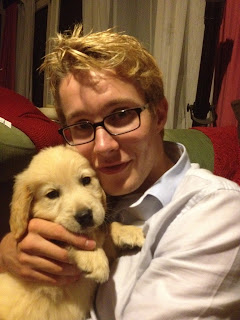 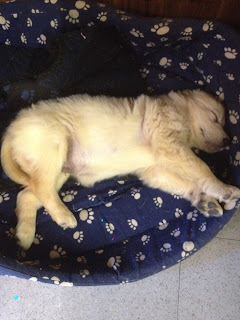