I'm not quite sure why, but my running's taken a big leap forward in the last week.

Saturday's long run was awesome. It's usually run with the squad but Coach Chris had chosen a route that's hilly. Hills and I are still not on speaking terms so I opted to go flat. The problem was that I couldn't quite make up my mind where to go. Up through the botanical gardens and to the bridge and back or through Kangaroo Point cliffs till my watch beeped at 6k and back again? I kept changing my mind until I settled on a combo of both - through Kangaroo Point, over the bridge and back through the gardens. Best decision ever!! I hit the top of the bridge when the sun was rising - a golden orb reflected off all the high rises. Gorgeous! My heart rate stayed low and I managed a 15k run feeling like I could have gone way further.

On Sunday I wanted to run but didn't want to push too hard. My solution? A Toby training session. He's going to be a sometime running companion when he's fully grown (he doesn't know this yet - I have to break the news to him gradually) and he needs to learn how to run without tripping me over or pulling me flat on my face. I took him on my 7k route and we walked whenever he found an interesting smell. When I got home I added up all the running sections and found he'd managed 5k out of the 7 - without causing injury to me. He's going to be a great running buddy.

Then yesterday we went to speed session. I'm still doing my 3.7k loop before I join the squad just so I don't push myself too hard. But yesterday might be the last time. I managed 4 X 1k reps all under 5 mins. That's the best I've done since the bottom dropped out in January. But even better than that - I didn't feel sick afterwards and I didn't need a nap before I started work. That's huge! And exciting!!

So how do I explain the big improvement? I think it's a combination of things. I've been committed to eating well - including lots of foods full of anti oxidants or are nutrient-dense. I'm supplementing with a pharmacy of different things and drinking beetroot juice (both good runs were done after a glass of the red stuff Carilyn - the experiment continues) I've been sleeping well (not sure though if the improvement is making me sleep well or sleeping well is causing the improvement - all I know is that when I'm not well I sleep really badly).

I've also tried to reduce the sources of stress in my life as much as possible. Some things I can't do much about but attitude can help with how I deal with stressful times. I've incorporated some yoga into my schedule and getting out for a walk with Toby at the end of the day is a good defuser. And I've changed my mindset where it comes to my #2 son.

He's struggled with depression for the past couple of years and I thought my role was to support him - and it is, but not the way I was doing it. I've had to accept that he's an adult and I can not control his actions. At 23 I can't be telling him what he can and can't do. We've been back to the doctor and he's had a dosage change on his medication and it seems to be working wonders. It's awesome to hear him singing around the house - something he hasn't done in a long time.

Letting go is incredibly cathartic. I've stopped waking up with panic attacks, wondering where he is whether he's safe. And I can talk myself down now if I do get a little worried.

But I think the the thing that's made the most difference has been my new best friend. He makes me smile every day. 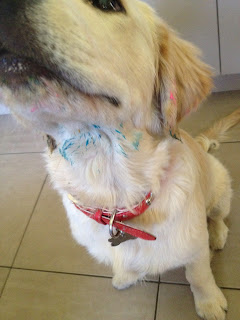 He's a great help in the kitchen. 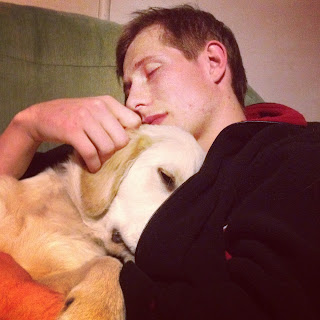 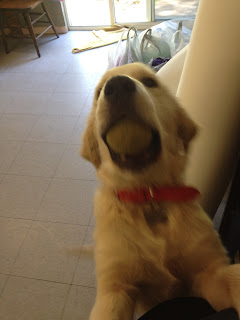 And he insists that I take time out to play. He's my furry little tonic.