It's been hard to put a new post together - my thoughts have been so scatty lately. Could it be that running is the only thing that's warding off dementia?

I totally forgot to buy bread yesterday. I'm going to be sacked from my job of Super-Woman. Seriously, who forgets to buy bread?!! Especially when they're the sole food purchaser for a family of four hungry males. There was some very unhappy campers in my house this morning. Personally, I would have thought that bread could be substituted - we have other foodstuffs in the fridge and pantry. Bacon and eggs. English muffins. Two minute noodles. Muesli. All are perfectly adequate breakfast foods (except maybe the two minute noodles - but when you're desperate ...). But apparently they take too long to prepare when you're tired from staying out clubbing till 2am and need to be at work by 9am.

Yesterday I couldn't manage to do basic maths. I've agreed to bake brownies for the up-coming running camp (the one that I've had to pull out of because I can't run, can't kayak, can't walk for longer than an hour). I wanted to find out how many I needed to bake so I could buy the ingredients. There's going to be just over 60 at the camp so Coach Chris and I worked out that I needed 5 dozen. I had a mini, internal freak-out that I'd agreed to do such a big order. An hour later I remembered that each batch of brownies is 2 dozen so I only have to do 3 batches. Mini-crisis averted but there were self-recriminations about the depth of my stupidity.

I went for a walk yesterday evening with Bubbles - the dog with the 6 inch legs. I'd been talking to my sister about our walks the previous day and told her that our pace was about 12 mins per kilometre. She was astounded that we were so slow. I reminded her that I wasn't supposed to be breaking any land speed records at the moment but it tugged that competitive cord in me so yesterday I, stupidly, picked up the pace. I learnt something really important - Bubbles is a great walking companion for me in my current condition. Her top speed is 11:30 per k and if we try to go any faster there's dragging involved.

Once again I had runner's envy of the worst kind yesterday. There's a long gentle descent towards the end of our walk and I had this wild urge to just cut loose and run down it. It's just as well I had Bubbles there to restrain my baser nature. I can only imagine how bad it would have looked with my running wildly down the slope dragging my dog behind me on her belly because her legs had given out.

Once I got to the oval next to my house the runner's envy hit another high. There were dogs running around chasing tennis balls. I've decided that in my next life I'd like to come back as a dog with long flappy ears and the waggliest tail. Then everyone would be able to see just how joyful running makes me. I would bound along with those flappy ears waving behind me in the slipstream that I'd created chasing that green tennis ball until I got distracted by a bird over the other side of the field and then my owner would have to spend half an hour chasing me. (Yes, I'm that dog - the one that's had no obedience training. Actually, I had two weeks of lessons before the instructor asked my owner not to bring me back. Puppy school fail!) 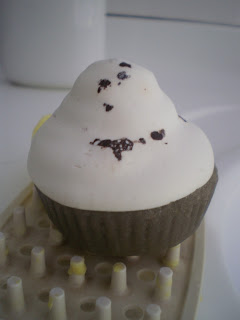 And my final chapter of this random blog belongs to novelty soaps. I was given a cute cupcake-shaped soap for Christmas and the other day it was forced into use. (Yes, I forgot to buy soap as well as bread). While lathering myself up with it in the shower I was compelled to contemplate whether the designers actually intended for it to be used on the human body. Those little brown bits on the soap were more abundant when I pulled it out of the packaging. They were also more sand-paper like - possibly intended for exfoliation or dermabrasion depending on the enthusiasm of the lathering. In fact they were so coarse that, had I had a tattoo I could have saved myself the expense of laser removal. And the shape of the soap is far from ergonomic. But I will say that there are parts of my anatomy that have never been so clean thanks to that mound of 'icing'. I have put soap at the top of my next shopping list ... in capital letters and highlighted!

Has anyone else done anything totally screwy/scatty/without engaging what little grey matter is left? Is this a side-effect of not running?
Posted by Char at 4:56 PM